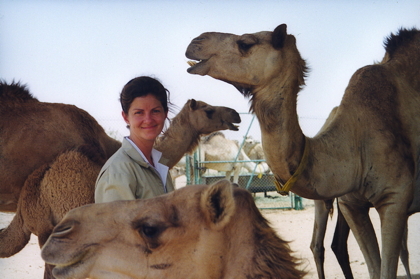 Camelracing is an arabic tradition that became very fashionable in the United Arabic Emirates. Some Sheiks are ready to pay as much as three million Dirhams, about one million USD, for a good racing camel.

The huge interest in getting better and faster racing camels is the reason why Sheik Mohammed bin Rashid al-Maktoum, Emir of Dubai, started a research and reproduction centre for camels far out in the desert.

A young Englishwoman, Dr. Julian Skidmore, known to everyone as "Lulu - the Camel Queen", is the sheik's senior scientist and wears her title with pride.

Her speciality are artificial insemination and embryo transfer - to make the Sheik's camels the most successful on the arabic peninsula.

Another animal - a very special creature - living at the Camel Reproduction Centre in Dubai, ows its existence to modern technologies and Lulu's know-how: "Rama", the world's only Cama is a male hybrid of a camel father and a lama mother.

A Documentary by Gabriela Neuhaus and Angelo Scudeletti